The idea of the Dove as a symbol of love probably originated in Greek Mythology. Aphrodite, the goddess of love and beauty, took a dove as a pet, thereby making it sacred. The bird soon came to represent her and thereby, love.

In Christianity a dove brought an olive branch back to Noah after the flood. Hence, a dove and olive branch now represent both love and peace. The dove is also used as a symbol of the Holy Spirit and is frequently seen above Christ’s head in paintings of His baptism. The dove is the representation of God’s love for his Son.

Many weddings now include the releasing of white doves in the ceremony, further linking these birds with fidelity, purity and love. 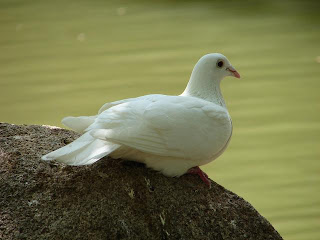 Thank you to Lightfoot for the photograph.
Posted by The Jungle Store at 8:39 AM
Email ThisBlogThis!Share to TwitterShare to FacebookShare to Pinterest
Labels: Doves