If Animals Competed In The Summer Olympics: Fencing

I will just let this video speak for me today. Here are some animals that would be fierce competitors in fencing if they competed in the Summer Olympics. Enjoy!

Posted by The Jungle Store at 10:33 AM No comments:
Email ThisBlogThis!Share to TwitterShare to FacebookShare to Pinterest
Labels: Antelope, Goat, Wildebeest

If Animals Competed In The Summer Olympics: Boxing

When it comes to boxing, kangaroos, would take the gold. Male kangaroos often "box" amongst each other, playfully, for dominance, or in competition for mates. The dexterity of their forepaws is utilised in both punching and grappling with the foe. But the real danger lies in a serious kick with the hindleg. The sharpened toenails can disembowel an opponent. This is one animal with which you wouldn't want to find yourself stuck in a ring. However, kangaroos very seldom attack humans unprovoked.

Posted by The Jungle Store at 8:34 AM No comments:
Email ThisBlogThis!Share to TwitterShare to FacebookShare to Pinterest
Labels: Kangaroo

If Animals Competed In The Summer Olympics: Aquatics

With the Summer Olympics coming up in 3 weeks, I thought it would be fun to see which animals would most likely win which sports events. If you visit the official Olympics Web site, you can see a list and descriptions of the sports and disciplines we will see in the 2008 Summer Olympics.

Today, let's investigate which animals would win in the aquatics sports of diving, swimming, and synchronized swimming.

The anhinga would win gold in the diving competitions, with its graceful movements both in and out of water. Anhingas dive and pursue fish underwater, propelled by their feet, their wings often partly spread. Anhingas often swim with the body submerged and head and neck above the water, slowly submerging to stalk fish, hence the nickname "snakebird".
The sailfish would take the lead in the swimming races. It is the fastest animals in the water at 70 miles per hour (113 km per hour) – the same speed in the water as cheetahs attain on land. As for synchronized swimming events, schooling fish would most certainly win. Schooling fish respond quickly to changes in the direction and speed of their neighbors. Anyone who has seen a school of fish can attest to their ability to change direction swiftly while still retaining their closely knit swimming pattern. They can move from one configuration to another and then regroup almost as one unit.

Posted by The Jungle Store at 11:48 AM No comments:
Email ThisBlogThis!Share to TwitterShare to FacebookShare to Pinterest
Labels: Bird, Fish

The Ornate Box Turtle (or Terrapene ornata) is Kansas' state reptile. These "decorated" turtles are yellow and brown. When you see one, you can easily tell its gender. Males have bright red and orange eyes, repeated on the front legs, face and neck. Females have yellow in these areas, and have slightly larger bodies than the males.
Can you tell the genders of the two below?

If you said the first picture is the male, and the second one is the female, you are correct!
If you look closely at the shell segments (scutes), you can see annual growth rings. If you count the number of rings, you can get a fairly accurate idea how many years the turtle has lived through. Box turtles may live over 30 years.
Ornate box turtles eat insects, spiders, worms and some vegetation. In autumn box turtles hibernate underground by digging themselves holes a few inches below the surface.
What makes these box turtles so unique is the hinge in the lower shell that allows them to fully withdraw their extremities into the protective inner shell. Predators have nothing to snap onto, so they get frustrated and leave, and the turtle lives.
Posted by The Jungle Store at 12:00 PM No comments:
Email ThisBlogThis!Share to TwitterShare to FacebookShare to Pinterest
Labels: Turtle

The jackrabbit is actually a hare, not a rabbit. All that this means is it is larger than a rabbit, and it has longer ears and hind legs than a rabbit. Jackrabbits were named for their ears, which resemble those of a jackass. They are speedy animals, capable of reaching speeds around 40mph, and they can leap 10 feet into the air! This is their main mechanism for evading their enemies. 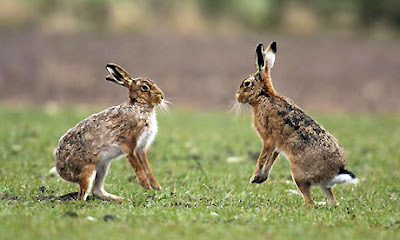 The black-footed ferret has a black mask on its face and tan ferrets have black markings on its feet, legs and tail tip. Its long, skinny body is good for crawling through tunnels and holes of prairie dogs, its primary prey. Prairie dogs make up the majority of the black-footed ferret's diet, but it also eats squirrels, mice, and other rodents. They are solitary animals, living alone and females raise their litters alone. 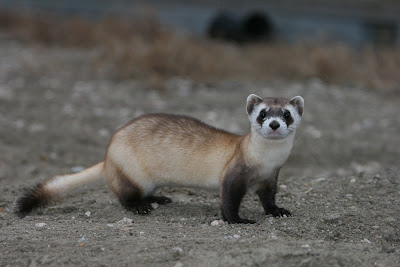 The rabbit-sized prairie dog lives on prairies and open grasslands, and live in underground burrows . This underground system of tunnels and chambers is complex, including nurseries, sleeping areas, and even toilets. They also have listening posts near exits to watch for prey. Burrows may be shared by snakes, burrowing owls, and black-footed ferrets after they prey on the prairie dogs. 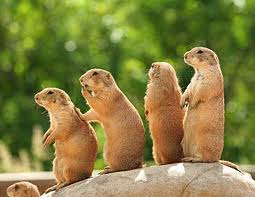 The prairie dog is an expressive animal that lives in family groups, which greet one another with a prairie dog kiss or nuzzle, and communicate with loud cries. Sadly, 98 percent of all prairie dogs in the Great Plains have been exterminated for farming purposes.

Having grown up in Kansas and lived here my whole life, I take for granted many things about this flat state that I call home. Many people who have never been to Kansas also have a preconception about Kansas - mainly, that it's boring. This week I would like to challenge that notion by exploring the indigenous animals of Kansas. Today, I am going to cover the indigenous birds of Kansas. 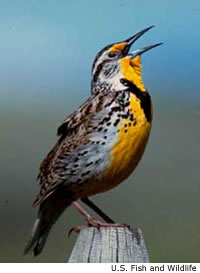 The western meadowlark is the state bird. This charming bird has all over brown and black coloring except for its bright yellow chest that has a black V on it. The song of the western meadowlark is a series of flute-like gurgling notes that go down the scale. The western meadowlark lives in meadows, plains, prairies and other open grasslands. This bird usually eats insects, although it will, on occasion, eat seeds.
The female finds a depression in the ground and builds a nest by digging in the dirt with her bill. She lines the depression with soft grass and forms a roof by pulling grass and plants over the depression. She then weaves in grass to make a waterproof dome, leaving enough space for an opening. The male protects the nest by noisily chasing intruders away.
Prairie Chickens

Kansas has the largest flock of prairie chickens remaining on the North American continent. Prairie chickens were once abundant, but have become extremely rare in most places due to habitat loss. One of the most noteworthy facts about this species is its mating ritual called 'booming' - the males inflate the air sacs located on the side of their necks and snap their tails to attract females.
Eskimo Curlew

The Eskimo curlew is another Kansas bird, which is a New World bird. Members of this species bred on the tundra of western arctic Canada and Alaska. One of the most important food sources was the Rocky Mountain Locust Melanoplus spretus. This species extinction circa 1902 may be a partial cause of the Eskimo Curlew's decline. Habitat destruction at wintering grounds in the Pampas is also implicated as preventing any recovery.
Whooping Crane

The whooping crane is an endangered species named after its whooping call. It is one of only two crane species found in North America. These majestic birds forage while walking in shallow water or in fields, and they are omnivorous. Click here to hear the sound of a whooping crane.
Posted by The Jungle Store at 3:23 PM No comments:
Email ThisBlogThis!Share to TwitterShare to FacebookShare to Pinterest
Labels: Bird

Since tomorrow is the Fourth of July, I won't be writing a post as usual. However, today I'd like to talk about how to keep your companion animals safe during the craziness tomorrow. With some extra precautions, your animals can remain safe and secure on Independence Day. Here are some tips I found at the IDA website:
1. Leave your animals at home when you go to see the fireworks.
2. Before you leave, make sure your animals are in a safe, quiet place. If your animal is afraid of loud noises, you might want to crate them or at least remove any items that the animal could destroy or eat. Leaving a TV or radio playing at normal volume can help comfort your companion animals. Consult with your veterinarian before July 4th for ways to help alleviate the fear and anxiety caused by fireworks displays.
3. Check that your companion animals have ID tags on so that if they do become lost, they can be returned safely home.
4. Never leave animals outside, even in a fenced yard or run because the noise might prompt them to run away or become entangled in their chain.
5. Never use fireworks around animals! While exposure to lit fireworks can potentially result in severe burns and/or trauma to the face and paws of curious animals, even unused fireworks can pose a danger. Many types contain potentially toxic substances, including potassium nitrate, arsenic and other heavy metals.
Have a fun and safe Fourth of July!
Posted by The Jungle Store at 10:55 AM No comments:
Email ThisBlogThis!Share to TwitterShare to FacebookShare to Pinterest 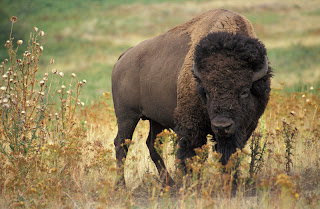 The American Buffalo (Bison) is an awesome animal. It is strong, loyal, tough, and always faces a storm head on. No wonder it has emerged into a symbol of strengh for America.
'Buffalo' is something of a misnomer as this animal is only distantly related to either of the two "true buffaloes", the water buffalo and the African buffalo.
The bison originally inhabited the Great Plains of the U.S. and Canada in massive herds, ranging from the Great Slave Lake in Canada's far north to Mexico in the south, and from eastern Oregon almost to the Atlantic Ocean. To learn more about this animal, view my previous bison posts.
The American bison is often used in North America in official seals, flags and logos. In the U.S., the American bison is a popular symbol in the Great Plains states. Kansas, Oklahoma and Wyoming have adopted the animal as their official state mammal, and many sports teams have chosen the buffalo as their mascot, including the University of Colorado Buffaloes.
Several American coins feature the bison, perhaps most famously on on the reverse side of the "buffalo nickel" from 1913 to 1938. In 2005, the United States Mint coined a nickel with a new depiction of the bison as part of its "Westward Journey" series. The Kansas and North Dakota state quarters, part of the "50 State Quarter" series, each feature bison.
Posted by The Jungle Store at 2:03 PM No comments:
Email ThisBlogThis!Share to TwitterShare to FacebookShare to Pinterest
Labels: Bison, buffalo
Newer Posts Older Posts Home
Subscribe to: Posts (Atom)